A few weeks ago, I purchased a really nice looking duvet cover from Primark for 9 pounds. I figured that it’d give me about 2 metres of fabric from each side, so that’s about 2.25 per metre – not quite as good a bargain as the dress duvet cover, but still better than I could get for the fabric itself. I was thinking it might become a side-zipped top or possibly a button-up shirt…. but then I came across this: 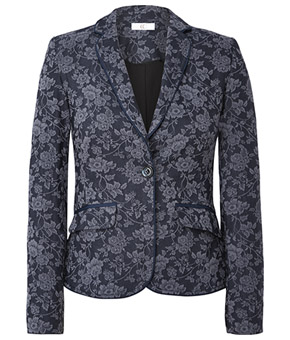 In a strange coincidence, this lined blazer from CC has an almost identical pattern to the fabric that duvet cover was made out of! So, there was no other option but to start making a jacket from it 😀

In the current issue (Feb – March) of Make it Today, they had a free gift of three paper pattern packs, which included New Look pattern 6231 – two jacket options, a skirt and a pair of trousers. Although the trousers look the easiest to make, my legs aren’t really designed for tapered close-fitting trousers, so it had to be the jacket.

It’s not an identical style to the CC one; this has a peplum instead of the vent flap, and isn’t lined, but it should work really well with the fabric 🙂 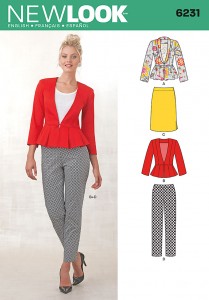 So far I’ve got the front and back done, but a slight problem with the iron means that I’ve had to delay working on the collar until I can get the interfacing to stick to the fabric.

And speaking of Simplicity New Look patterns, have you seen their blogger challenge?