And here we have a selection of bears for the Bears and Squares knitting campaign from Simply Knitting….

Badger bear was finished quite a while ago, but I’d stored him in the hope of eventually knitting his ears…. but I think without them, he looks like a badger, so this is how he’ll stay 🙂

Sophie Bear is crocheted, complete with a crochet dress. I still need to work on getting my stitches tighter (I used the smallest hook I had), but I think she came out quite well all the same 🙂 What Sophie bear would be complete without a few friends? These are a couple of bookworms I knitted last year – they didn’t look quite as good as I thought they would though….

And because the purple bookworm wouldn’t stand up on its own, I had to get Sophie bear to hold that one as well *laughs*

And working on one of the older patterns I have for a knitted bear, the last one (who doesn’t actually have a name yet!) was knitted with two strands of wool, so he’s a nice cuddly size, with a mottled effect in his colours 😀 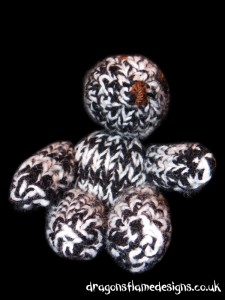 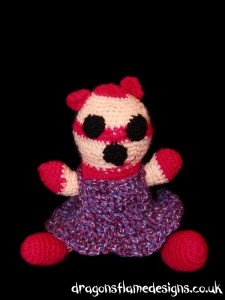 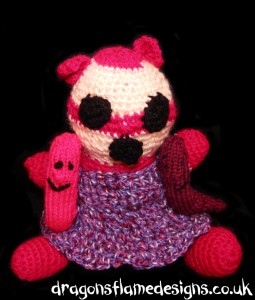 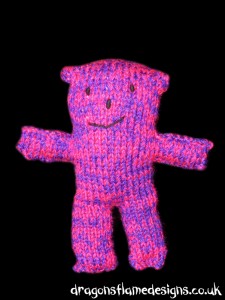