I’ve wanted to try machine sewing something for a while, and when I saw that this month’s Sew Crazy Challenge was “Big Dreams” themed, I was inspired to make a teddy bear & a bag – after all, if you wanted a great night’s sleep, what’s better than a cuddly bear & a bag to hold your favourite book?

I had some funky material from The Makery that was sitting around looking for inspiration for a while now, so decided to take the plunge and try making a bag out of that, and some starry fabric for the lining and handles. I followed the excellent tutorial from Diary of a Quilter and actually, I’m quite pleased with how this came out 😀 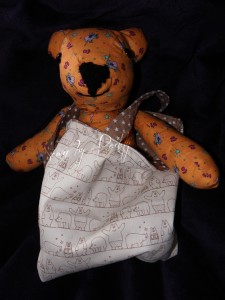 Some of the stitches on the bag aren’t perfect by any means, and I know my straight lines need practise to get them parallel to the edges, but I’m determined to not be such a perfectionist with things, so it’s definitely good enough for me 😀

And the best thing? I only used half a fat quarter for the outside, and only slightly more for the lining, so I have enough left over to make a second one!

The bear was also my first machine sewn plushie – I need to practise the joints a bit more, but it looks like a bear, and that’s the main thing. I used the Pip Pattern for him (but made it larger than the hand-sewn version), although I did knit the nose, as I fail at trying to sew them!