I was struggling for something to get my Dad for Father’s Day last month – I’d asked him if there was anything he was particularly wanting, and was told “surprise me”…. not all that helpful!

I knew he’d been unable to find a decent summer hat in the shops, and I’d spotted a pattern on Melly Sews, which I thought would work perfectly. To start with, I made a pattern for a hat that would fit a teddy bear, and that came out pretty well: 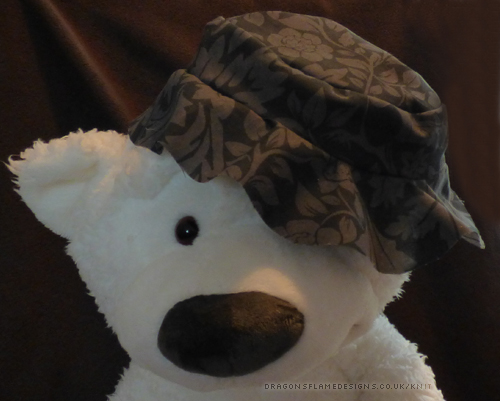 (it does fit the bear it was intended for, but this bear is more photogenic…. it just has a larger head!)

I made a pattern from newspaper, bought the outer and lining fabric, and started pinning it together. After sewing the crown to the main front of the hat, I asked Dad to try it on…. and of course it was too small. However, it did fit me! So as I couldn’t make the hat any larger without starting from scratch, I decided to stick with the hat and make it for myself instead. I was almost ready to attach the brim when another relative asked to see it, and suggested that the main part of the hat was too tall. Cutting that down by a couple of inches, I pinned the brim to the hat and it still fitted me.

Buoyed on by my apparent success, I then machine stitched the brim to the hat, and guess what? Yeah, you guessed it – the hat’s now too small (ironically, it’s not tall enough over my ears now). I tried hard to stick to a really narrow seam allowance and it was pretty even all the way around. All I can think is that the original measuring is out a bit and maybe also the cutting.

I will try another hat for Dad before the end of the summer, but I think I will try a polycotton version first, rather than just diving in with the decent fabric next time!