Yet more knitting, with a bit of crochet included! 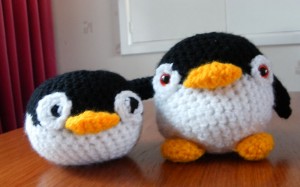 This time, I decided to have a go at crocheting an Amigurumi toy…. the first attempt, is the penguin on the right – it’s also the first time I tried using those eyes as well, and I reckon it came out pretty well 😀

The penguin on the left, was crocheted for a friend’s baby, so I left off the flippers and feet, so there’s less risk of any pieces coming loose over time 🙂 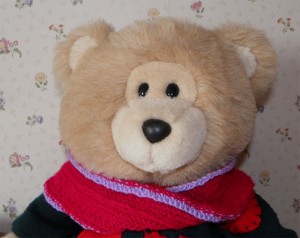 This scarf, was started in September (I think) 2010, and knitted on a circular needle. I’d not tried using a circular needle before, and maybe the mobius scarf wasn’t the most intelligent of first projects *laughs*

I had given up with it last year, but decided to come back to it, and at least finish it off ready to give to my Gran for her birthday. I’d done a colour change just before I left it, and did wonder how good that would look, with two rows of lilac around the edge, but that seems to look better than I thought it would! 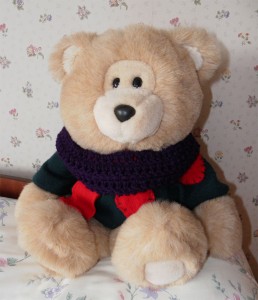 Spurred on by my success in finishing the mobius scarf, I decided to also try crocheting one (also for my Gran’s birthday!), which I will admit was a lot faster to finish than the knitted one (I lack patience with stuff like that *blushes*).

But, not only does that mean I’ve completed one of my “semi-finished” projects, but also, I’ve been able to knit two more items to wear, instead of just sticking to toys 😀

…. now if I could only get a bit more progress on that gilet (I’ve finished the back piece, so far)….