Having had enough of the problems with the other messenger bags I’ve tried making, I decided to “invest” in a Craftsy Course called Design Your Own Handbag. Promising to tell me how to make several different pockets styles and zipped closures, I felt it was worth the money as it should prove useful for many different bags.

I will admit I didn’t find this course as easy to follow as the Fleece Sewing one I’ve started – yes there’s a lot of information, but as the bag design is up to each individual, there’s a lot of things that I feel could be explained a bit better.

Lining the outer pocket up was a bit hit and miss – mainly miss, as I had to unpick the entire thing and resew it. The inclusion of an interlining (I used some thick cotton I found in a local fabric shop) meant that it was a bit too thick to get my hand sewing needle through to tack everything, so I had to make do with pins…. which wasn’t ideal.

However, the second time around, I did get the pocket to line up – and the button I’d already machine stitched onto the pocket, also lined up with the buttonhole! 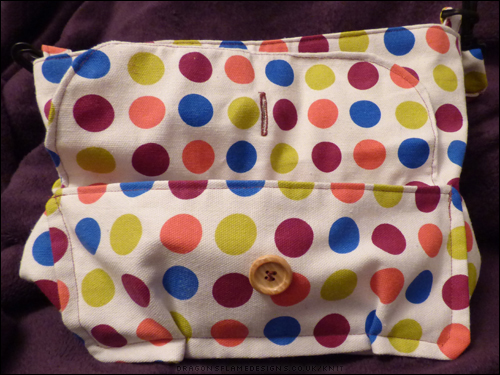 Just to prove the button does do up…. 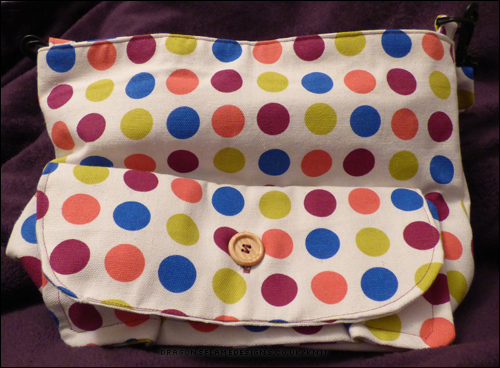 Adding the back zipped pocket was also a challenge – after stitching and unpicking it, I decided to make it more like a welt pocket, so you couldn’t see the zip tape. That gave a nicer finish, although if I made another, I would also add an extra inch to the width of the pocket pieces – that would enable me to sew it neatly around, without the risk of catching the zip tape on the sides.

The rest of the bag outer was pretty self explanatory – much like the Good to Go messenger bag, you cut the corners from the main pieces in order to get the depth of the bag. My canvas was a bit too fray-happy at times, resulting in some extra stitches being necessary, so I did zigzag the edges of some pieces just to be on the safe side.

Due to the fraying, I had to ignore where it’s said to trim the edges really close to the stitching, but while that made some of the seams a little more bulky, it didn’t really change the look of the finished bag.

I added a couple of patch pockets to the inside, like I did on the previous bags, but other than that, the lining pieces were just the basic pattern ones. 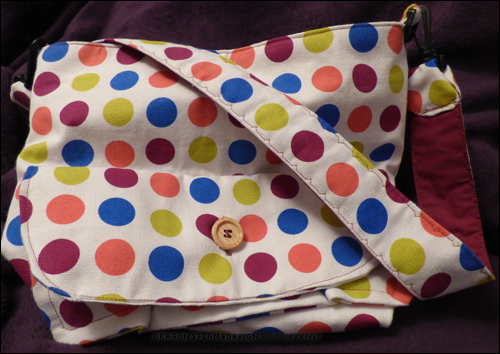 I decided to add some tabs on the sides to hold a strap, rather than adding a tab to the front and back – I prefer a cross-body strap. Top stitching the strap was done with a decorative stitch, just to make it look a little different to the regular boring straight stitch. The tabs and strap were made almost identically to my London Tourist bag.

Now we come to the main reason for me wanting to take this Craftsy course – the top zip. None of the other bags I’ve made have had a closure to the main body, so this was an important thing for me to want to learn. After all, even if you have a flapped messenger bag, a strong wind can make the flap flip up, so it’s nice to have a secure way of closing it. 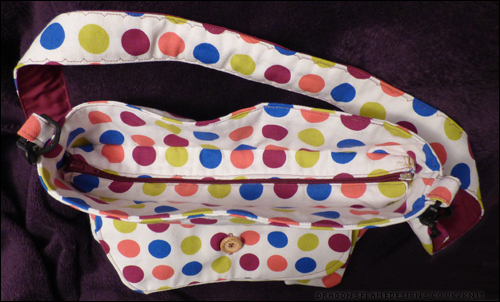 I struggled to get the top piece to line up to the zip – it’s the first time I’ve used an open (separating) zip, so I didn’t realise the metal at the end took up so much space. Partly because of the fraying canvas, and partly due to not cutting a little extra on the flaps, I didn’t have space to turn the flap pieces right-side-out and keep the metal part of the zip on the outside. So that side had to be zigzagged together – not an ideal finish.

However, using some double-sided fusible tape to ‘baste’ the zip in place seemed to work really well for that – much better than the back zip pocket (too many layers for the heat fro the iron to go through). And the zip is perfectly usable and relatively neatly stitched as well!

Rather than leaving a hole in the base of the lining to turn it all right-side-out (I really like my lining to be strong, and I didn’t feel that a hand sewn seam would have the strength I was after, I left a gap at the top, where the facing and outer join – that was able to be closed with the final top stitching, so you wouldn’t know there’d been a gap there 🙂 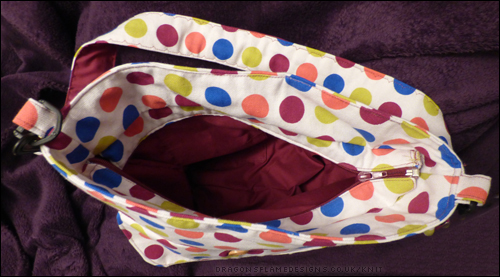 The only other thing I wish the course had pointed out, was that the angle of the top zip means that it needs to be pushed down into the bag to run smoothly – this means you can’t put anything in the bag that would be 1″ or less from the zipper flaps…. which means my entire bag really could’ve done with being an extra inch tall to compensate *sigh*

I would try making another bag from this course, mainly because now I know the ‘quirks’ of the methods, I should be able to rework it and make a bag with the [erfect (or near enough) dimensions!

Polka dot fabric from Abakhan (part of a ‘canvas remnant pack’), polycotton lining, cotton interlining and and accessories from a couple of local shops.