You can never have too many bags…. or at least you can never make too many bags! I’ve not been 100% certain about the way the lining looks caught up on the messenger bags I’ve previously made, so I decided to try out a new pattern. The Good-to-go messenger bag by Two Pretty Poppets, has a plain body with a patterned flap…. but I wanted to change that slightly, so I used their pattern, but with patterned fabric on the outside, and a plain lining.

I also added in a zipped pocket on the flap, piping around the flap (it’s not clear in the photo, but that’s white bias binding with sailboats on, to fit the beach theme), and added some plastic bag clips to hold the strap in place – not only does that make the strap removable if needed, but it also adds a nice touch to the finished bag. 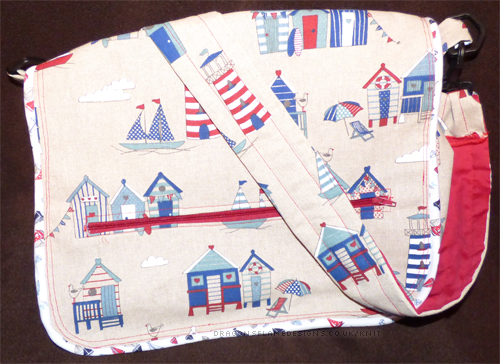 Because of the way the bag is sewn together, the lining isn’t stretched around strange corners, and there’s no weird puckers and stretches on the inside. I also changed the inside pockets, to fit a small bottle of water and a smart phone, to save rummaging around amongst everything else just to find the phone when it rings. 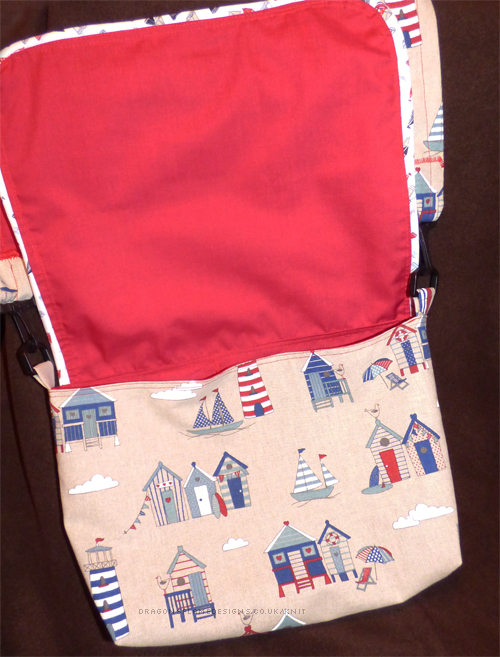 I would probably make the bag slightly taller if I made another, and maybe also add in the clasp to close it (I left that out, as I wasn’t too sure how accurately I could attach it!), but I think it’s a very good pattern, and it’s also a lot easier to sew than the previous one I tried!