I found this polycotton fabric in the Sewing Studio last year, and bought a metre of it to make into a child’s shirt. I thought it would be perfect for K’s birthday. Of course things never work to plan on timescales do they? A month after his birthday, and I still had only got as far as cutting out the shirt pieces and starting a Clovelly cap for him.

I thought it was time I actually sat down, blocked out all the distractions, and finished his shirt – and much to my amazement, it worked!

I decided to not have the top button on the collar – K is only 4, so I didn’t think he’d really need a formal feeling shirt just yet. And having that top button slightly lower made the button placement slightly easier to work out too!

This was my first attempt at pleated pockets, and they actually came out looking almost exactly as they should do! I think maybe one pocket is slightly smaller than the other, but who’s going to notice? I did skip the pocket flap buttons and buttonholes, as I thought that would be way too fiddly for a four year old to undo just to stash things in his pockets.

The base and sleeves have a simple double turned hem. I used purple thread for the needle, and had a beige thread for the bobbin. Thankfully I had the thread tension set perfectly, so the beige doesn’t show on the right side of the fabric.

Add the shirt to the baseball cap I’ll be blogging later in the month, plus a hand drawn dragon card, and you have the perfect belated birthday present!

Rummaging through my bag of UFOs, I came across the pieces for this Blank Slate Patterns Blanc Tee. I’d purchased the fabric over a year ago, cut out the pattern, then didn’t have the confidence to figure out if the sizing was accurate, or if I’d need to grade the seam allowance at the waist.

I decided it was about time I finished it, and stitched the seams exactly as the pattern said. Blanc is quite a loose fitting top, and that style coupled with the really stretchy nature of the fabric, meant it really looked oversized in the shoulders and chest.

Putting it on inside out, I pinned out a new armhole and sideseam, which gives it a much better shape. 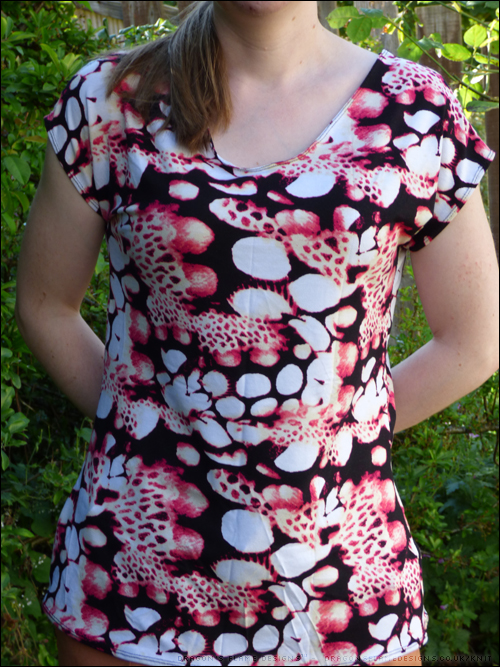 Oops – I hadn’t realised the fabric was quite so creased…. I think this proves I need to make use of the iron a bit more!

The neckline is wider than I’d normally wear, and my decision to simply turn and hem the neck has left the neckline a little saggy. I think next time I make a Blanc Tee, I’ll use some bias binding on the inside just to give the neckline some structure. 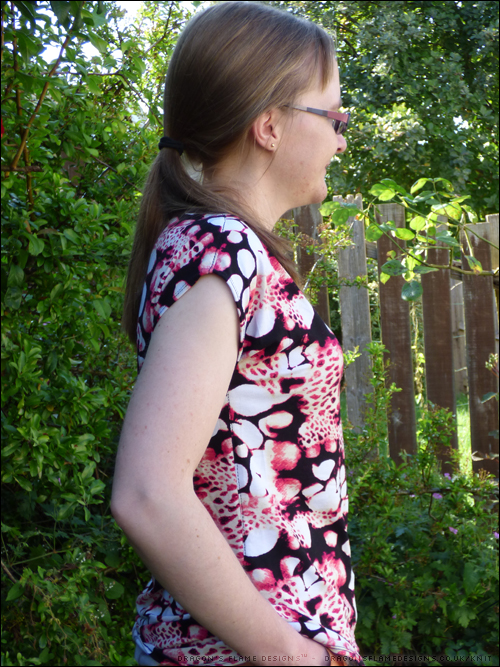 Overall, it’s a great fit and a complete bargain – the fabric was from the remnants pile in my local shop for £4 🙂

The previous raglan sleeve top I made really didn’t fit properly, as I couldn’t figure out how much ease I would need and ended up making a size larger than was wise…. rather than use the same pattern, I decided to try the Blank Slate Rivage Raglan as I know the Blank Slate patterns I’ve tried before are a good fit. 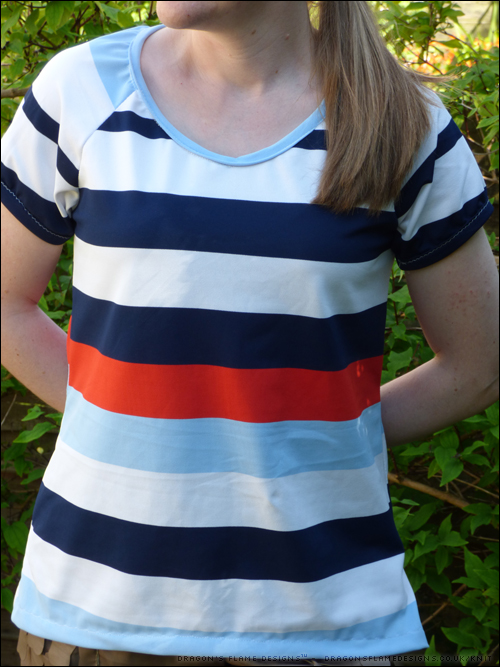 The fabric came from a mystery lucky-dip bag from Abakhan – it’s not my favourite fabric, so I thought it’d work as a test run to check the sizing.

Obviously Blank Slate patterns are made to a shape that is more like my own than Simplicity patterns. I didn’t have to make any alterations other than the length (being petite, I’m getting used to altering patterns in length so the waist hits at the right point). 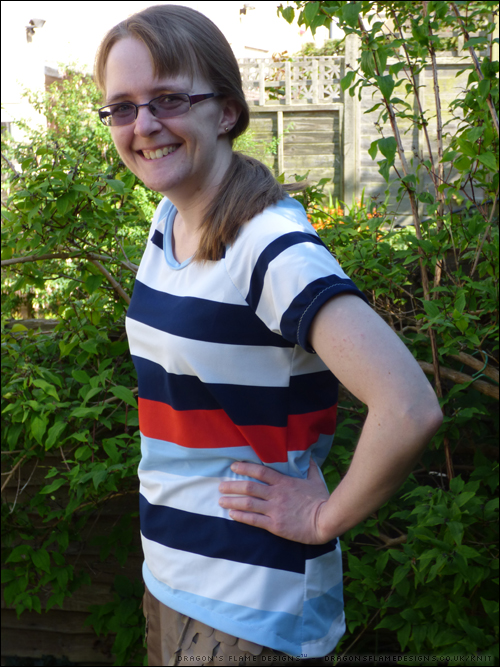 I tried to match the stripes, but somehow they became misaligned as I cut the pieces…. but for a trial run, I’ve ended up with a perfectly wearable top and a pattern I know works for my shape. And really, who’s going to notice the mis-matched stripes when I’m wearing it? 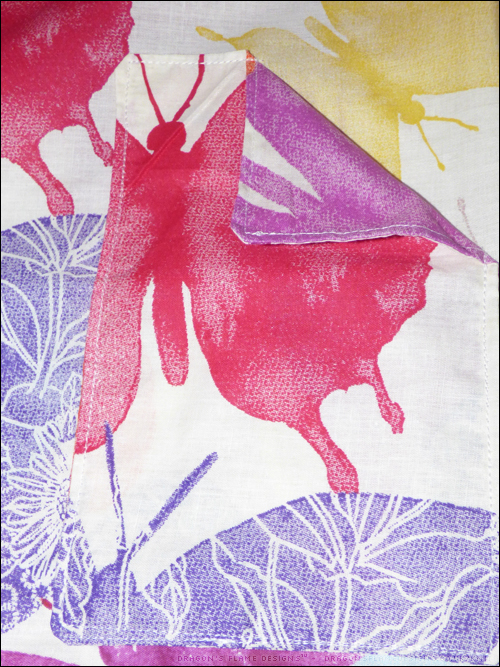 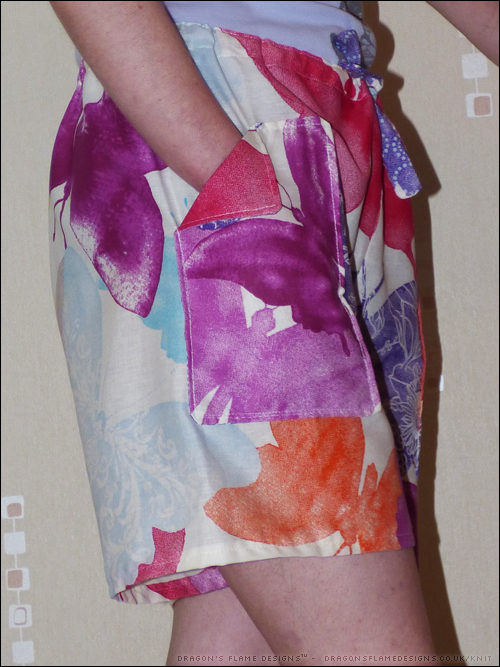 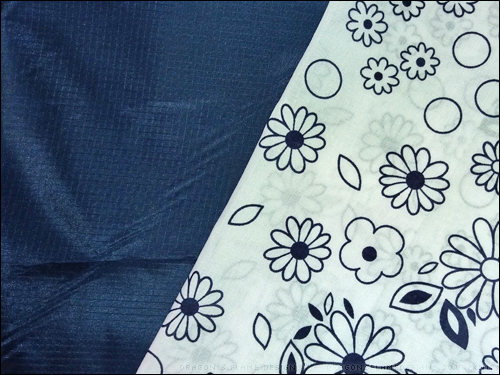 I found some navy Rip-Stop and floral polycotton at Minerva Crafts, which look like they should be ideal for the jacket I want to make. So far I have most of the pieces cut out, but I’m still working on getting the hood to fit – the hood pattern comes from a different top, so the neckline is a totally different length, which is taking a bit of fiddling to get it to line up properly.

I will admit that I have never hacked a pattern before – literally every item of clothing I’ve made so far, has been done according to the pattern. However, the Blank Slate Patterns Shoreline Boatneck caught my eye, and was screaming to be hacked into something slightly different.

The pattern itself comes with a ‘hack pack’ with suggestions like a button back, or making it into a dress. But the idea of buttons down the back has never really appealed to me – I wanted to add them to the front. However, my sewing machine didn’t really like me sewing 7 buttons on the front of my previous shirt so I wanted to find a way around that. Really, I needed to stitch the buttonholes first, so if I messed it up, I wasn’t ruining an entire top.

Luckily I found a tutorial for a hidden button placket at Craftsy, which with a few tweaks was able to be used on my Shoreline top. Ironically, those buttonholes are the neatest I’ve sewn so far, but it definitely looks nicer having them hidden from view. 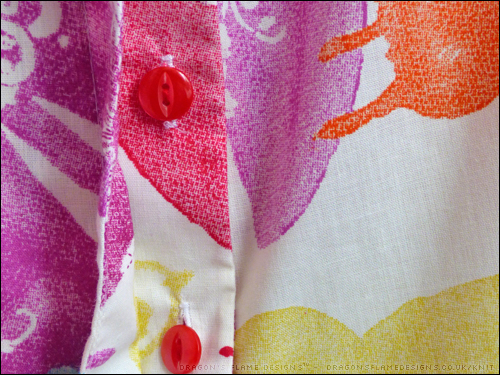 The fabric is a double duvet cover set from Shaws Direct – I actually only used the two pillowcases for this top, so that leaves me with about 4m of fabric I can use for a couple of dresses.

I started the buttons just above the bust level, although I think I could’ve done with adding in another on the neckline just to help keep the shape. But as it is, I can use a small clip as a decorative feature if I want to. The only other change I made was to add a seam allowance to the back, and cut those pieces separately – the pillowcases didn’t quite work out to be the right size to cut the back on the fold! 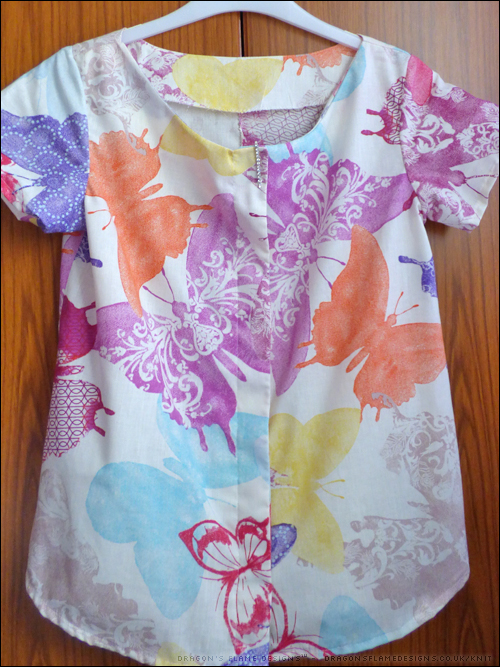 So there you have it; my first Shoreline Boatneck, and my first pattern hack – you wouldn’t really know that was made from two pillowcases, would you?