He took a lot longer to complete than I had anticipated, mainly because I really was uncertain what I was going to do with his hair. Adding in the crocheted deerstalker hat worked perfectly, even if the hat is slightly too big for his head!

The basic mouse pattern uses Alan Dart’s May Day mouse pattern, with suitable colour changes for the trousers & shirt. The scarf and coat were freestyled to make sure they looked just right 🙂 And the hat? That came from an ornament pattern by Kristen Howard on Ravelry.

Seeing as I’d finished Sherlock Mouse, I couldn’t resist trying another Sherlock pattern – Crocheted Consulting Detective by Vilma Ilona. I’ve never tried a crochet pattern quite like this one before, so some of the shaping was a challenge, and I will admit the hair instructions left me completely confused, so I made that up as I went along. The hat is loosely based on the same pattern as SherlockMouse’s, but it was freestyled a bit to make sure it fitted his head properly and covered the mess of hair as well!

His head is slightly loose (blame my lack of stuffing skills for such a small space), but the scarf and coat collar help to make sure it doesn’t flop around too much. 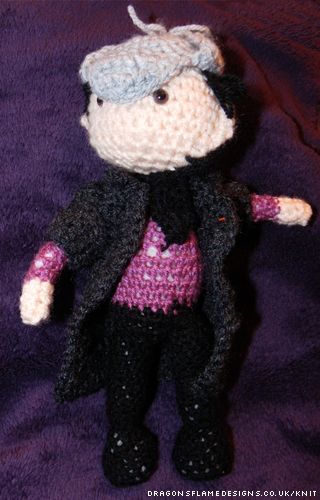 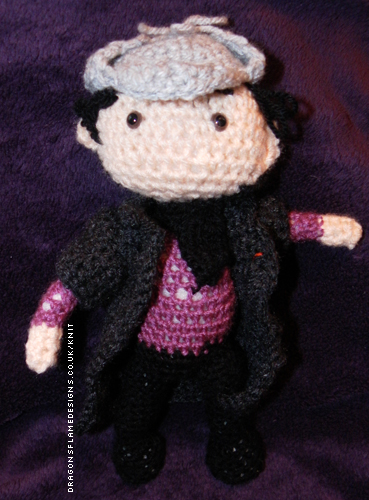 Some of the crochet increases have left gaps in the stitches where the stuffing is showing through, but I can work on those and just sew a few lines across to cover those up (the yarn was a little thinner than normal). That’s also why the trousers & shoes look like they have white sparkles….

But overall, I’m pleased with how Sherlock came out, and now he’s ready to go cluing for looks!