I can’t resist a bargain, so when I spotted the Stitch London book in the Works for just £3, I knew it would be an interesting read. Several of the projects use the dreaded double pointed needles, but there’s also a few that are knitted flat, so for about the price of a Starbucks Frappuccino, I decided to get the book.

It comes complete with a kit to make Cooey the Pigeon…. along with some tiny dpns to use. My previous attempts with dpns have always ended in me frogging the knitting, and ramming the needles back into the base of my knitting bag. But I wanted to give this a go, as Cooey just looked too cute to pass up on!

I pulled the first two rounds off the needles when I realised I hadn’t made the stitches tight enough, but on the second attempt, things went much smoother – I think the shorter dpns were more helpful, as the longer ones just seem to wave around too much when I knit.

I couldn’t find the instructions for how to make Cooey’s feet (the website link has changed since the book was printed), so Cooey has slightly quirky feet, which are sewn on with yarn rather than glued. I wasn’t able to get the first wing to look all that neat by the colour changes, so for the second one, I cast on another 5 stitches at the start of the white row, then cast them off in the next row. That was then sewn onto the back of the wing after I’d finished sewing in the blue yarn, neatly hiding the yarn ends. 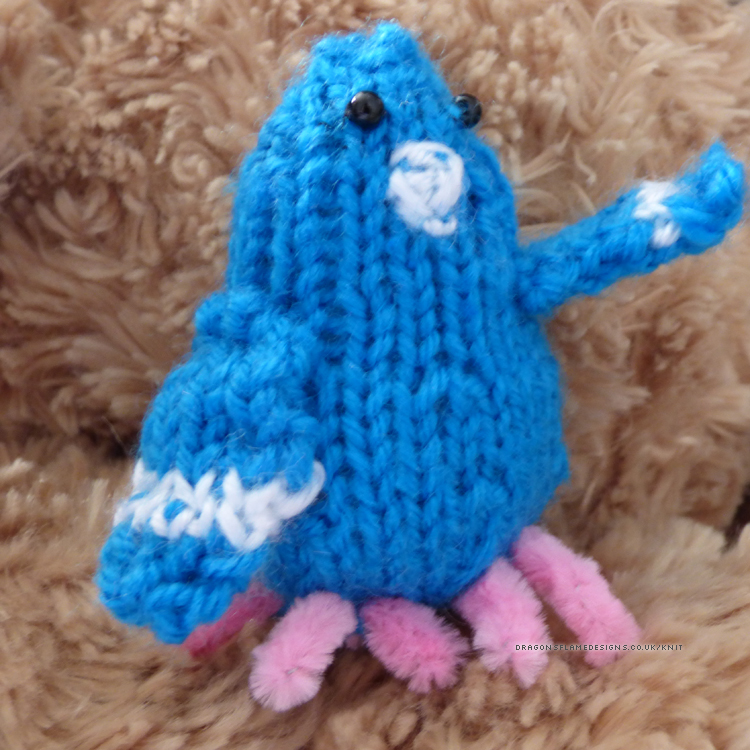 The only disadvantage with the book, is picking what to knit next – should it be the Tube Rat, Red Phonebox (maybe a TARDIS), or the Tube Scarf? They all look so incredible, that I just can’t decide!