…no, wait that’s not the right joke is it? Anyhow, I bought this Zebra jersey panel ages ago and was scared to cut into it in case I messed it up. While I was sorting through my bag of UFOs, I rediscovered it and decided to take the plunge and cut myself a Union Street Tee before I could scare myself off again!

The panel came as one piece with four different sections, and I’d calculated that the sleeves would work from the hoof print and there should be just enough of the zebra pattern for the neckline and sleeve cuffs. What I hadn’t calculated correctly, was the height of the t-shirt itself, as I had to piece a couple of plain sections on the shoulders to make it work. But that could easily be a design feature, especially now it’s topstitched for added strength.

Of course the real draw of the panel was the ‘rear view’ of the zebra – it definitely makes the back of the t-shirt more interesting than normal. I just wish they had more panels with other animals on as well as the zebras – I’ve love a little zoo of animal panel t-shirts!

What do you make for a young relative who loves dinosaurs, when you’ve already made him a cuddly dinosaur before?

I settled for my tried-and-tested Hatteras Hoodie, and went to find some suitable fabric… which was harder than I’d first thought! Eventually I came across this dinosaur sweatshirt fabric at Sewing Studio, and despite the main stretch being vertical rather than horizontal, the random positioning of the dinosaurs meant I could still use it

I’d purchased some black ribbing fabric to use for the hood lining, waistband and cuffs. Unfortunately (the disadvantage of buying online) this fabric was a lot thinner than I’d anticipated. The hood lining didn’t need to be heavy, so I used the ribbing for that, but it wasn’t going to work for the cuffs as it was.

I had part of a pack of cuff ribbing left over, which worked for the cuffs on this hoodie, but there wasn’t enough for the waistband.

Playing around with the original ribbing fabric, I tried holding two layers together and realised that might just work to give enough stretch and strength for the waistband. This hoodie is an age 6, but made for a child who wears an age 4 at the moment. It should give him a nice long time to wear it before he grows out of it, but it does then need a decent rib for the waistband to help hold it in until he grows more!

I cut four waistband pieces instead of two, and just used the additional ones inside the main waistband pieces to give it more strength. To me, that feels strong enough, but we’ll have to see how well it holds out – he won’t have the chance to try this hoodie on until Father Christmas delivers it next week, so I won’t know for certain just yet!

It’s taken me a while to get back to my  Union Street Tee*, seeing as I knew I’d messed up the neckline. I’ve actually shelved this since May, as the neckline was annoying me! However, I realised that unpicking it would be unrealistic as the binding was already top-stitched once I noticed my mistake.

Now the weather is starting to cool down, I thought it was time I actually finished the hems so I could get on and wear it.

You wouldn’t know I’d made a mess of the neckline, would you? I know there’s puckers and catches in the bodice around the neckline, but I can happily ignore those!

After trying some raglan sleeve t-shirts, I decided it was time I attempted a v-neck, and the Union Street Tee* by Hey June Handmade caught my eye.

As usual with Hey June Handmade* patterns, the instructions are really detailed, so I figured I would be able to make a super v-neck…. unfortunately, due to user error, my v-neck is currently looking rather lopsided. 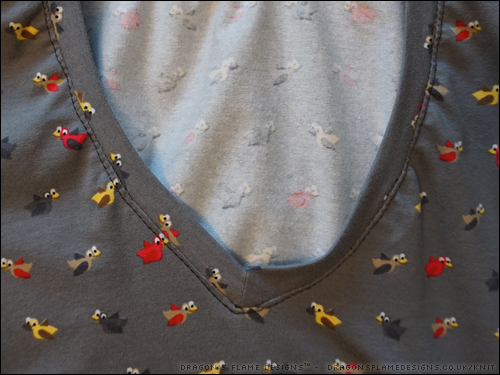 As I was sewing the neckline band, I think I must have stretched one side further than the other…. unfortunately, I didn’t realise until I’d top stitched the band, so I don’t know if it’ll be possible to unpick to resew that.

Maybe I’ll just leave it wonky, and call it a design feature! 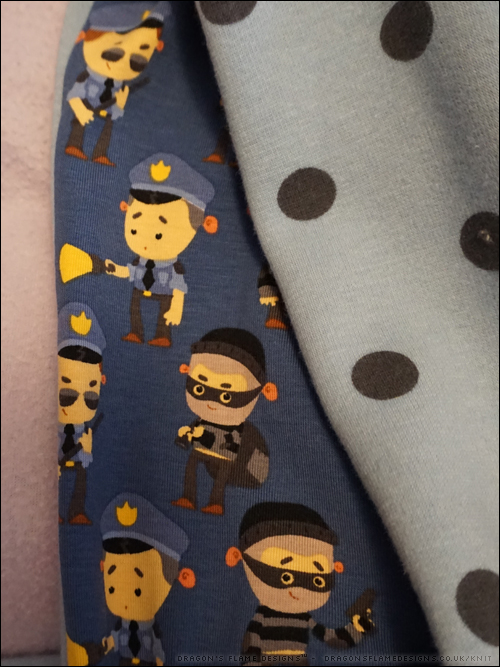 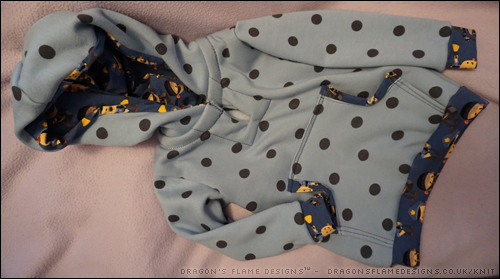 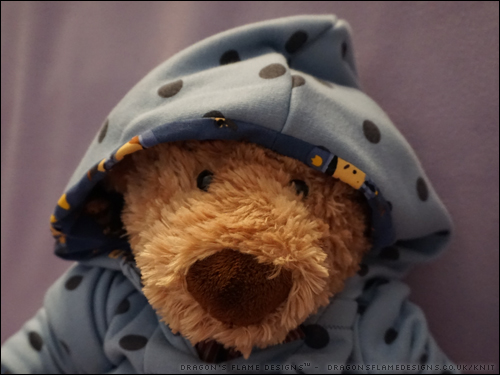 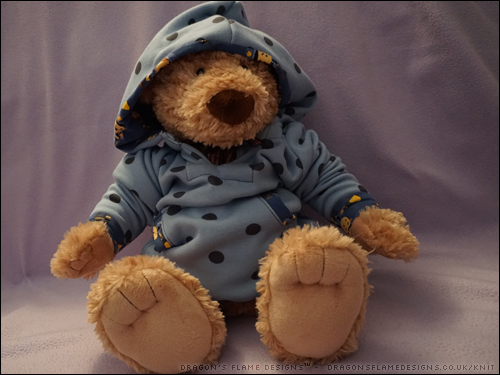 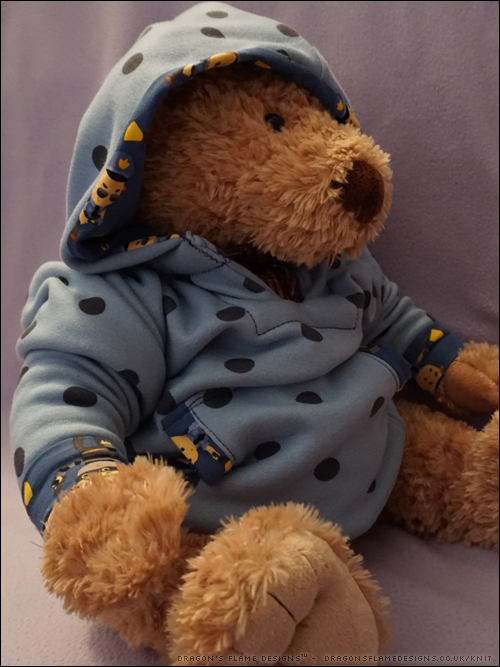 Ever since I made a hoodie from a Craftsy course last year, I’ve wanted to make a hoodie with more of a traditional sweatshirt style. Searching through various websites, I eventually came across the Halifax Hoodie by Hey June Handmade* which looked perfect for the style I was after.

As this was my second ever hoodie that I’d made for myself, I decided to keep things relatively easy, and make style A – a regular-styled hoodie with a split neck. I did make things a little more complicated by choosing to line the hood, and add in the thumbhole cuffs from the Lane Raglan Top* too. 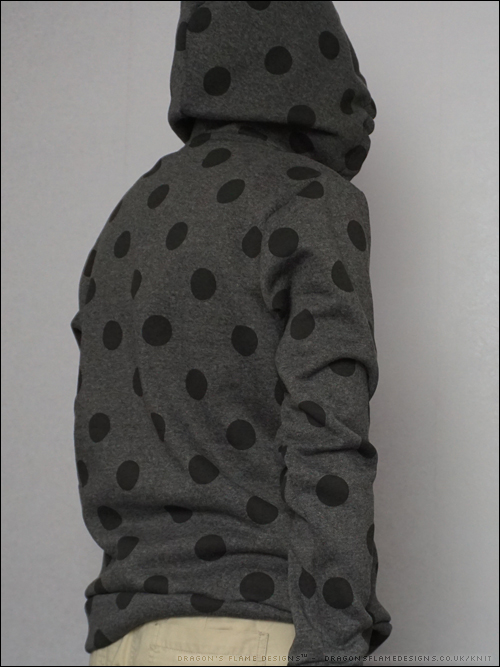 There were a few points where I started arguing with my sewing machine, especially at the point where the neck band is meant to cover the raw edges of the hood and the main body. But a couple of hand stitches helped just to hold the band in place.

I do need more practise (or maybe better instructions!) at adding in eyelets for the drawstring cord. The back of one of the eyelets came off as I was sewing the drawstring channel, and I’m not convinced it’ll stay in position when the top gets washed. At least with the drawstring in place, the eyelet won’t fall off completely – it’ll get caught on the drawstring itself, so I shouldn’t be able to lose it! 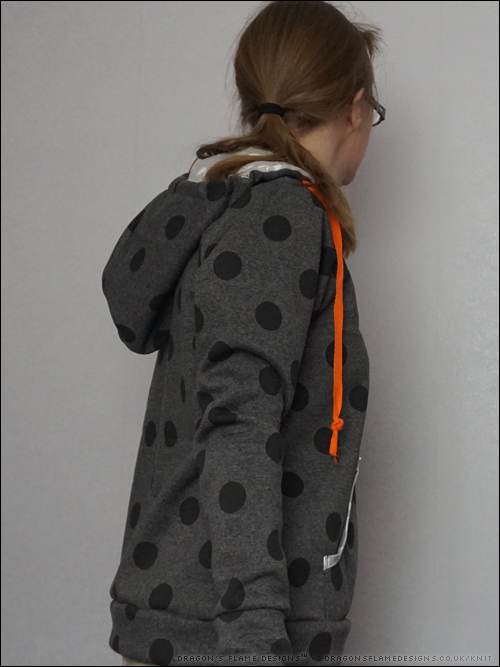 I lined the hood with some grey swan jersey fabric and used the same fabric for the binding on the edge of the kangaroo pocket. The drawstring tape is a little brighter than I’d expected, but it picks out the orange bills of the swans. 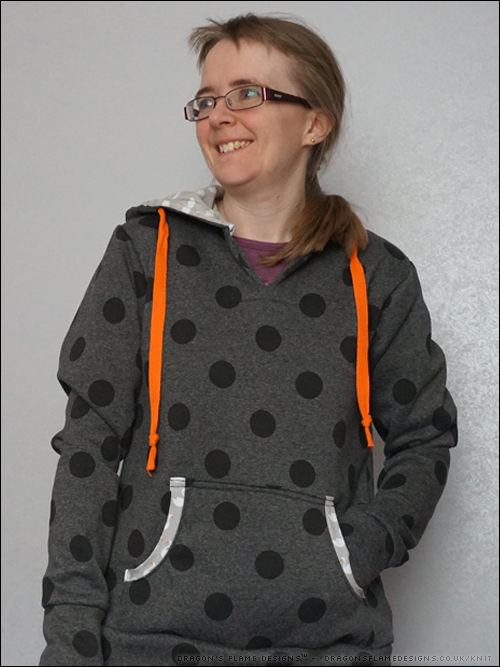 The instructions for the Halifax are really easy to follow, and it resulted in such a great hoodie, I’m already planning my next Halifax top.