I was pleasantly surprised that I could fit the pattern onto one and a half fat quarters – I used one for the front two panels, and another for the rest of the cap. The underside of the peak is also patterned, while the inside of the cap is a plain black polycotton.

I cheated with the topstitching, using a zigzag stitch to ensure the biasbinding was caught with the stitches on the inside. I found it too fiddly to manipulate the layers to get my stitches accurate enough for a straight stitch.

Unlike the caps I made for myself, this one has buckram fused on the inside of the peak for stiffness. It actually gives a much better feel to the peak, so I think I’ll be using that for any hats I make in the future too!

Pattern: Clovelly Cap by From the Studio (Jamie Kemp) graded to a XS size
Fabric: Dinosaur fat quarters from Hobbycraft

I found this polycotton fabric in the Sewing Studio last year, and bought a metre of it to make into a child’s shirt. I thought it would be perfect for K’s birthday. Of course things never work to plan on timescales do they? A month after his birthday, and I still had only got as far as cutting out the shirt pieces and starting a Clovelly cap for him.

I thought it was time I actually sat down, blocked out all the distractions, and finished his shirt – and much to my amazement, it worked!

I decided to not have the top button on the collar – K is only 4, so I didn’t think he’d really need a formal feeling shirt just yet. And having that top button slightly lower made the button placement slightly easier to work out too!

This was my first attempt at pleated pockets, and they actually came out looking almost exactly as they should do! I think maybe one pocket is slightly smaller than the other, but who’s going to notice? I did skip the pocket flap buttons and buttonholes, as I thought that would be way too fiddly for a four year old to undo just to stash things in his pockets.

The base and sleeves have a simple double turned hem. I used purple thread for the needle, and had a beige thread for the bobbin. Thankfully I had the thread tension set perfectly, so the beige doesn’t show on the right side of the fabric.

Add the shirt to the baseball cap I’ll be blogging later in the month, plus a hand drawn dragon card, and you have the perfect belated birthday present!

What do you do when the shirt you’re sewing isn’t progressing as quickly as you’d hoped? You shelve the shirt, and make a small Clovelly cap instead of course!

As you can probably tell from the raw edges, this isn’t quite finished yet – I need to get another metal rectangle loop thing for the back, to feed the velcro section through, to make the cap fully adjustable.

Having made a dolphin, I could hardly pass the opportunity to make a dinosaur! The body shaping was a lot easier, although I will admit his face is slightly off-centre. 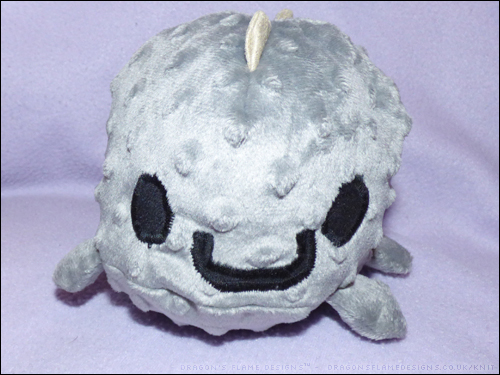 I used black faux suede for the eyes and mouth but looking closely at the stitching, I should practise my applique skills for unusual shaped pieces! The spines are also faux suede, just to add a little colour to lift the grey. 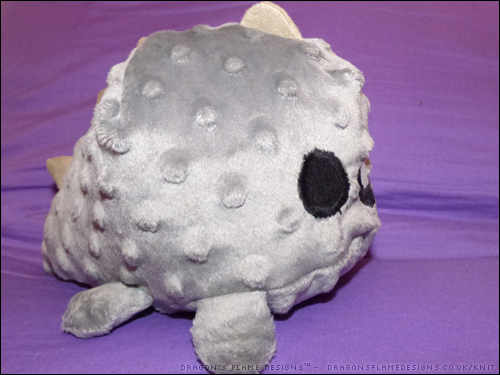 The faux suede was quite stiff, which made it challenging to turn such small pieces, but I think it was worth the effort, as it sets off the dotty grey really well.

Both Dotty Dinosaur and Dotty Dolphin are just the right size to sit on your hand, and despite having never made either of them before, didn’t take too long to make up.