I’ve made several card holders before, but they’ve either not had a closure, or relied on either velcro or a button and hair elastic to hold them closed. After a friend mentioned how easy she was finding poppers to install into sewn items, I thought it was time I tried them out; and as luck would have it, I also came across the pattern for these Criss Cross Card Holders.

Although I haven’t made any ‘real’ new year’s resolutions, I do want to try and use up some of my fabric offcuts, so the triangular sections on these card holders might be the ideal use for some smaller offcuts. As a first attempt at the pattern, I used some of the ‘Skyline’ canvas-type fabric I had previously made a bag and notebook holder from. 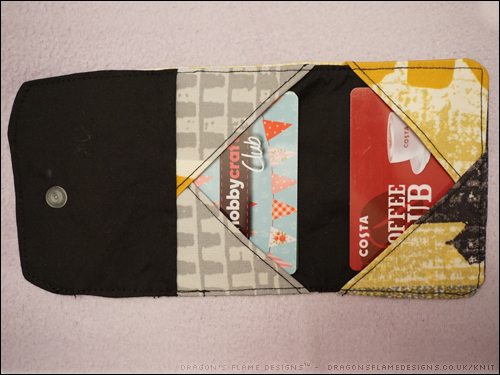 It took a little while to get the placement right to make sure the skyscraper was visible…. then I realised that once the card holder was folded, the top of the skyscraper would actually be upside down (whoops!). 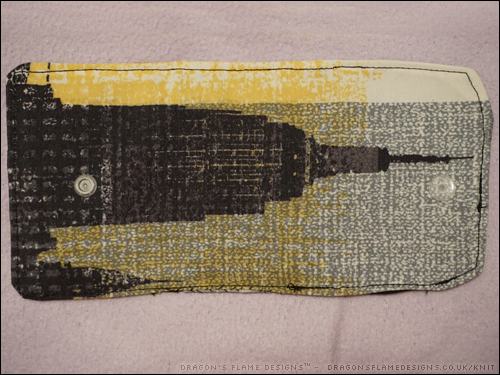 But it is perfectly functional as a card holder. The only thing I found which I wanted to change, was the card sections being a little too wide. I had a feeling that the cards might slide out a little too easily from that, so I decided to try making a second card holder that might be a little more suitable. 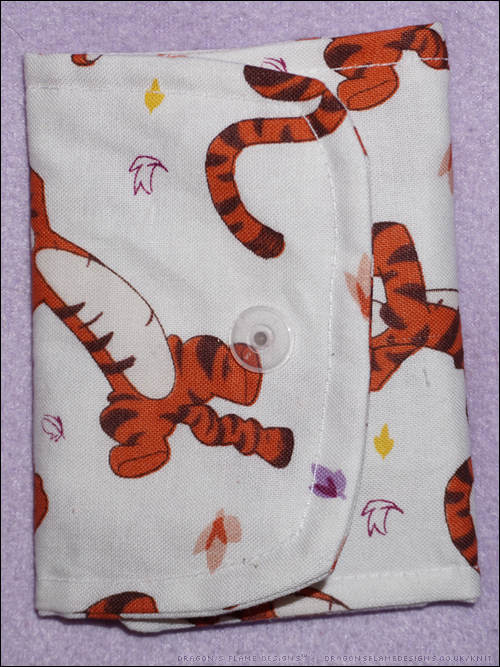 This fabric came from Hobbycraft last year – I’ve been waiting for the ‘perfect’ project to use it, and what better than a little card holder? I didn’t quite line up the popper perfectly, hence the slightly wonky front, but it’s still usable. 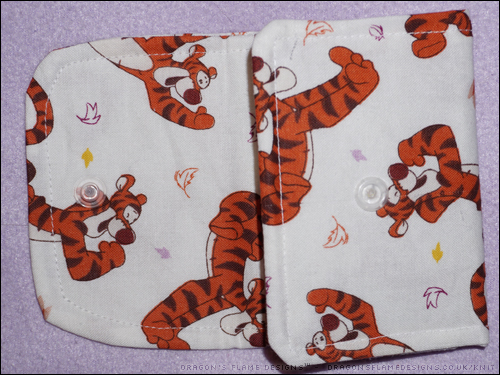 I increased the seam allowance when sewing the front and back together, and also increased the top stitching to 1/4″ which holds the cards in much tighter. 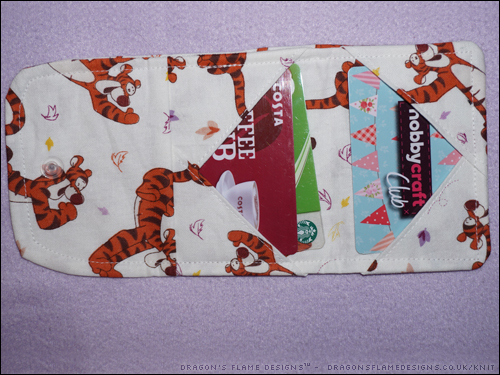 I’ve made some notes on the pattern so I know what alterations I need to make for future card holders.

I don’t know about you, but I have so many loyalty cards, it’s hard to find the right one in my wallet! So when I decided to give a relative a Starbucks card as part of their Christmas present, I thought I’d sew a basic wallet to store it in.

I found the pattern at Crafty Cupboard, and found this one a lot easier to follow than the previous wallet I’ve made. I didn’t have any fusible fleece, so I used some lightweight interfacing on the lining and the outer fabric, just to give it some more stability. 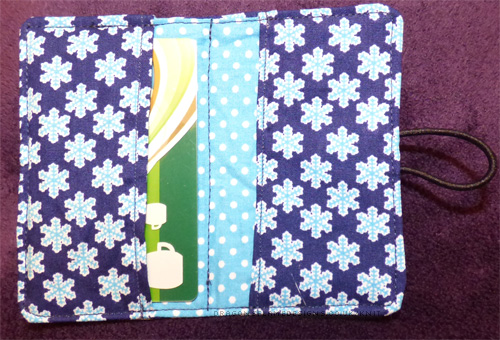 The pockets aren’t lined, so I’m not too sure how well they will last, but it looks strong enough for the moment. I used a hair elastic and a hand-sewn button to close the wallet – the last one I made didn’t have a closure, so there’s a risk of the cards sliding out in your bag. 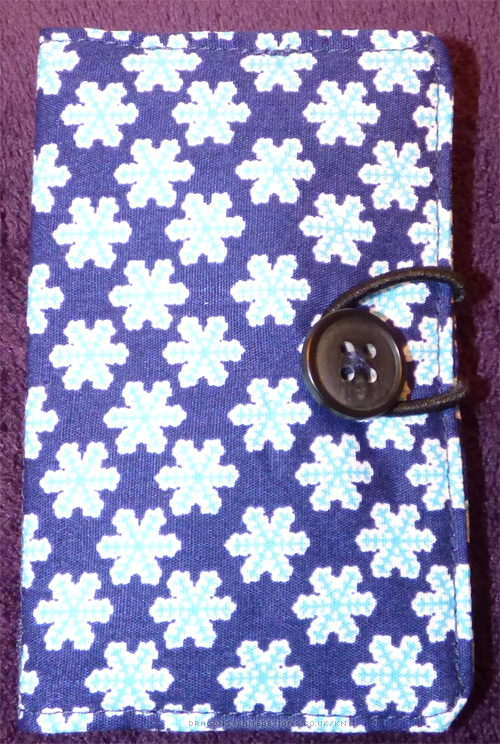 I was hoping to find a novelty button with a cup of coffee painted on it, to go with the Starbucks theme, but there didn’t seem to be any about so I resorted to a plain black button instead, to match the hair elastic.

I noticed that a friend was using a really tired-looking purse to hold her store loyalty cards, and decided it was about time I made her a little present. I had some fat quarters left over from my last Hobbycraft purchase, and found the perfect tutorial at Midwestern Girl for a  wallet – it’s a perfect size for those loyalty cards, and should save her needing to use that tired old purse any more! 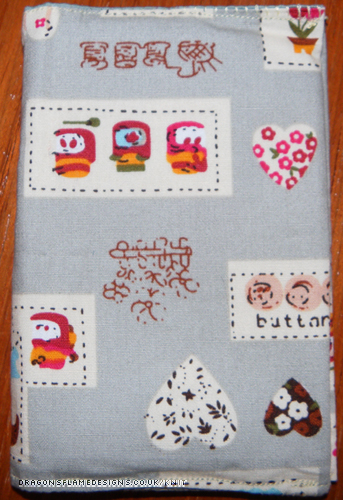 And inside the card holder: 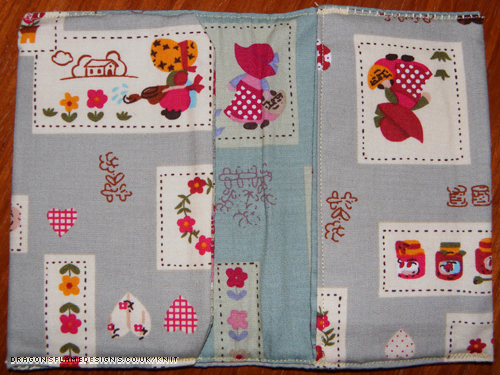 If I made another one, I would try to get those corners turned out better – that really lets it down on looks. But it’s practical, which is the whole point 😀 I think I would also add a button & elastic to hold it closed, as it’s made quite loose (to fit as many cards as possible in), but that does mean the cards slide about a bit in the pouches.

While I was in a sewing frame of mind, I thought it was time I made my Christmas apron for Gran. Yes I know it’s now March, but Gran requested Christmas fabric for Easter! You can probably just make out the pocket in the photo – that’s slightly higher placed than the last apron I made, and the top is slightly narrower than the first apron, although I think it needed to be slightly wider than I have it. The straps are simple cotton herringbone tape rather than being made out of the same fabric – Gran prefers them to look like that. 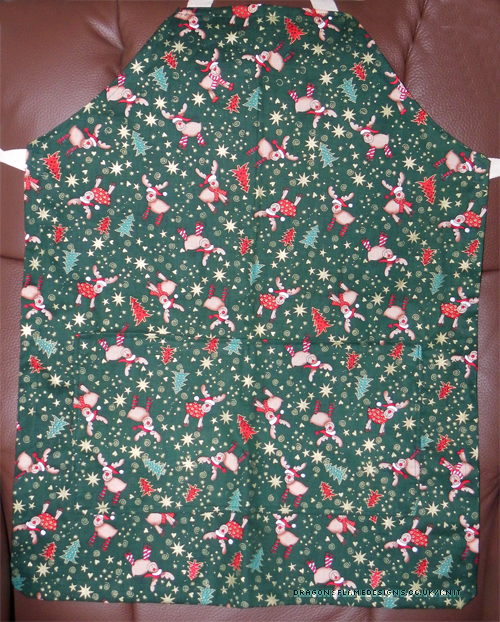